I made strawberry cake for Easter. I based it off of this recipe even though the blogger has a strawberry cake recipe, I just loved those vanilla cupcakes (I’ve made those twice although I used a mix of flavorings the first time and used a mini cupcake pan). I substituted boiling strawberry mush (from fresh strawberries) for the water (though more than one cup), and added red food coloring and strawberry flavor. I put strawberries and whipped cream in the middle and loosely based the icing off of this recipe. My sister thought whipped cream instead would’ve been better as it is lighter and less sugary. 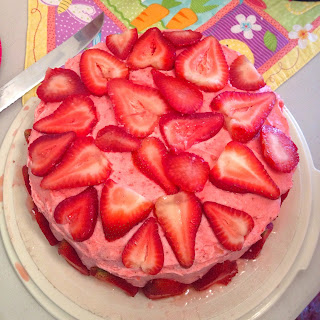