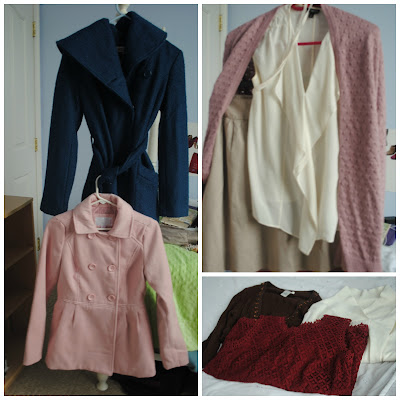 We had quite the sweater Christmas. I received two cardigans and two pullovers myself, and my four sisters received at least five sweaters, one poncho, and one sweater dress between them. I also received two lovely coats; for, as we all said, whenever the weather really decides to be winter. The above right photo is my outfit, with a new cardi (I also wore the pink coat and my maroon cloche) for Christmas dinner with my grandparents. 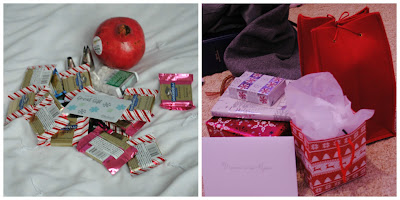 Those are my gifts, sans the wedding ones. I kept it simple. I bought my brother and sister-in-law a combined Christmas and wedding gift (three games; and he scared me, he almost bought one) and took it to the wedding (I later asked them not to open them as we did a brief Christmas with them on the 27th). I did not bother with a gift for my dad at all. He is SO hard to buy for, and he can buy whatever he wants when he wants it. I gave my mom her gift early, and I had bought a lot of my sisters gifts at an art fair in June.
I already received cookies at our cookie exchange (I did share some) and fudge and candy from managers at work, and then Mom really lavished us with candy as you can see. I am going to have no teeth. My sister remarked whilst eating cookie dough as she made cookies recently that she was trying to make herself diabetic. I am sure I shall be. We had lovely candy-cane fudge and meringue Christmas trees at Christmas Eve, our traditional massive cinnamon rolls for Christmas breakfast, and we will be having our traditional doughnuts for New Year’s. Also, I randomly, re-actively try to eat healthy as if that carrot stick will somehow undo all the candy damage 🙂
Oh, yes. And Mamau always gets the dogs and cats gifts. And my sister’s little bratty dog (Holly) kept trying to steal our lab/beagle mix dog’s bone, and Snickers finally snapped, and we had a small dog fight during which Holly gave a pleasant display of her hideous Chihuahua teeth and after which she was grounded upstairs. Rather hilarious although a bit scary because Holly’s barks are piercing, and she is considerably smaller than Snickers. 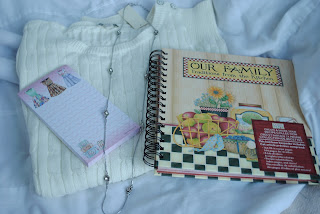 Here is what I received before Christmas dinner with my grandparents. We have such a lovely traditional sit-down dinner at my grandparents with ham and beef and rolls and plenty of vegetables.
I meant to post this the week after Christmas, but since I did not I will briefly mention New Year’s Eve and Day. I worked about 5 hours on New Year’s Eve, and then went home and finished a new skirt. New Year’s Day is when we have people over for doughnuts and pork (we need to rethink the menu . . . and entire process; we had people over starting too early and lasting too long . . . ten hours is an excessive party).