I knitted many things over the last fivish months. It makes me feel so accomplished to cram them all into one post . . . so it looks like I have been more industrious than I actually have (I actually am now working on becoming fairly industrious in knitting; this post marks some of the beginning to this strange phenomenon). Ahem.
I knitted my grandmother three scarves for Christmas . . . that was not my initial intention, but anyway.
Here are two: 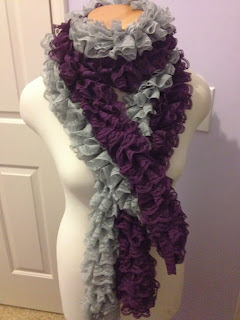 I call this the lazy, untalented, un-crafty person’s knitting. I made these from packages of lace with pre-formed holes through which I knitted (I think you can also crochet them as with the similar mesh yarn). They each took no more than two hours. I also made an even simpler scarf by finger braiding a chain of mesh yarn which formed a long loop to be looped into an infinity scarf. I prefer this look to the feather boa one . . . if you must cheat and if you must wear this style 😛 (I am terribly afraid that the person for whom I made that scarf did not even see that it was a scarf and even if she did, she did not like it; oh well, the rest of the gift should have been okay . . . and that rest still fulfilled the $15+ requirement for the gift; but grrr, I still feel bad, hence this confession/explanation).

I copied from sight this pattern for my mom from ravelry since I thought it was stupid to pay $4 for a simple design. It isn’t exact to a perfectionist but the same effect. This is the one for my grandmother. 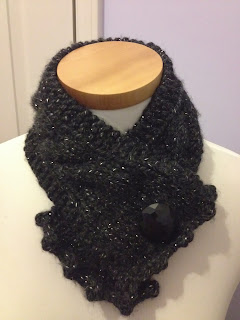 My Ravenclaw scarf. Ravelry had plenty of free “patterns” (more like tutorials because they are so simple). I wimped out and bought cheap yarn. I am normally a fiber snob . . . and should remain so because apparently I do not know how to buy decent cheap items. This stuff (Paton Metallic) is AWFUL. Wispy chains filled with black fluff. Fluff, not yarn. I am OCD and frequently felt compelled to pull out said fluff. Lots of it. 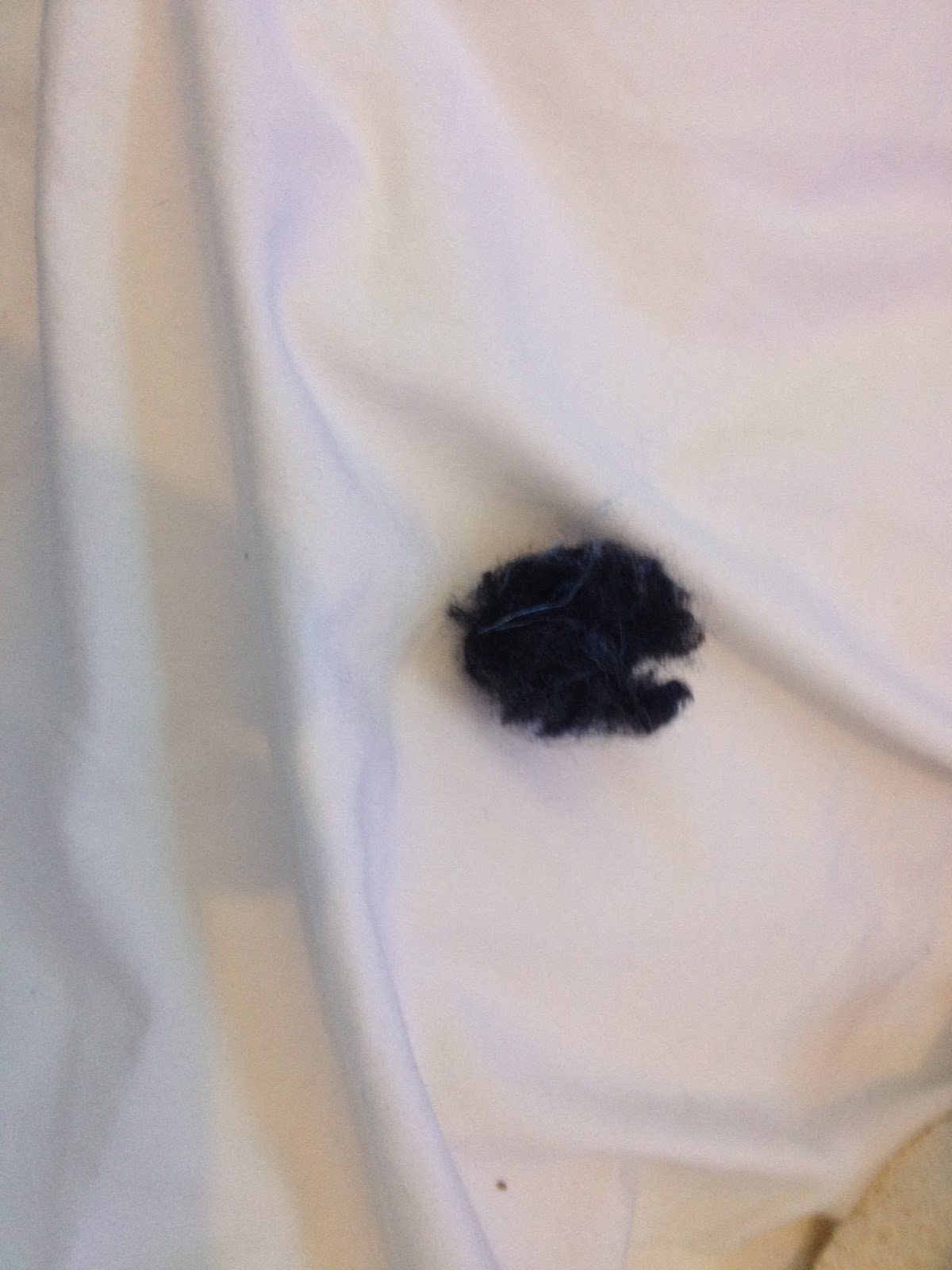 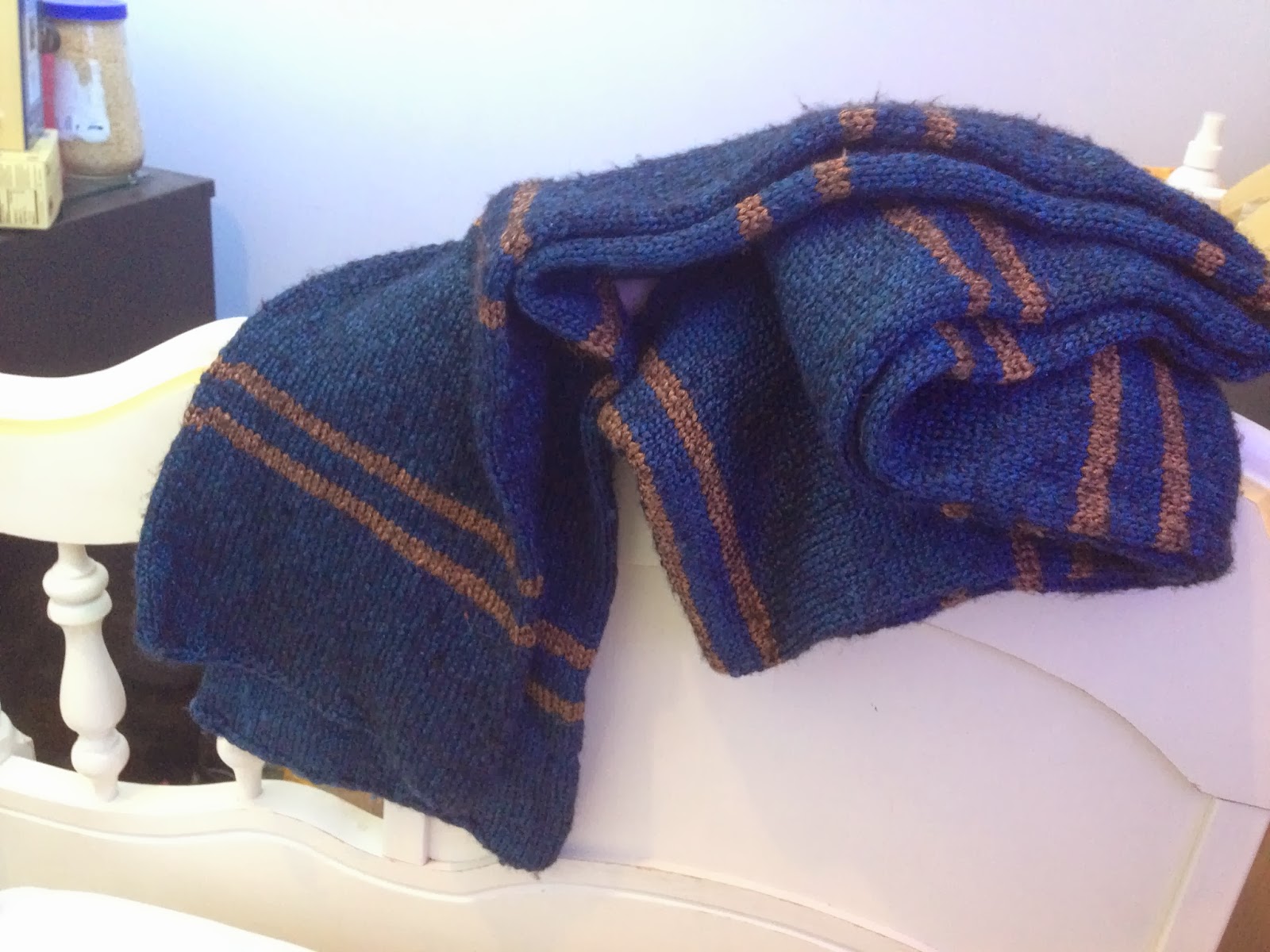 Ravenclaw all the way peoples. I am happy to report that I got Ravenclaw in a couple tests (or at least one :/) when I had only seen the fourth movie and that is all I knew of HP . . . Slytherin came next and then Gryffindor and then Hufflepuff. I also got Ravenclaw for Pottermore. Yes, it is official. Also, I love how a version of spell-check has the House names in it; I missed an “f” in Hufflepuff and right-clicked to see if Hufflepuff showed up; it did. Awesome.

The white beret (Cascade Beret on ravelry, free) I finished in the fall. The first of the berets promised much earlier last year for my sisters when they saw my pink one. I guessed the wrong yarn weight so had to find different patterns. Great big sister. I prefer larger sized berets . . . in theory the size of mine which I wore all of once. Whatevs. The second beret I finished several weeks ago; I like this one (Ume Hat and Gloves on ravelry, free) better in both the pattern and the shape of the hat (the first one didn’t decrease as nicely). I have most of one matching fingerless glove done also. 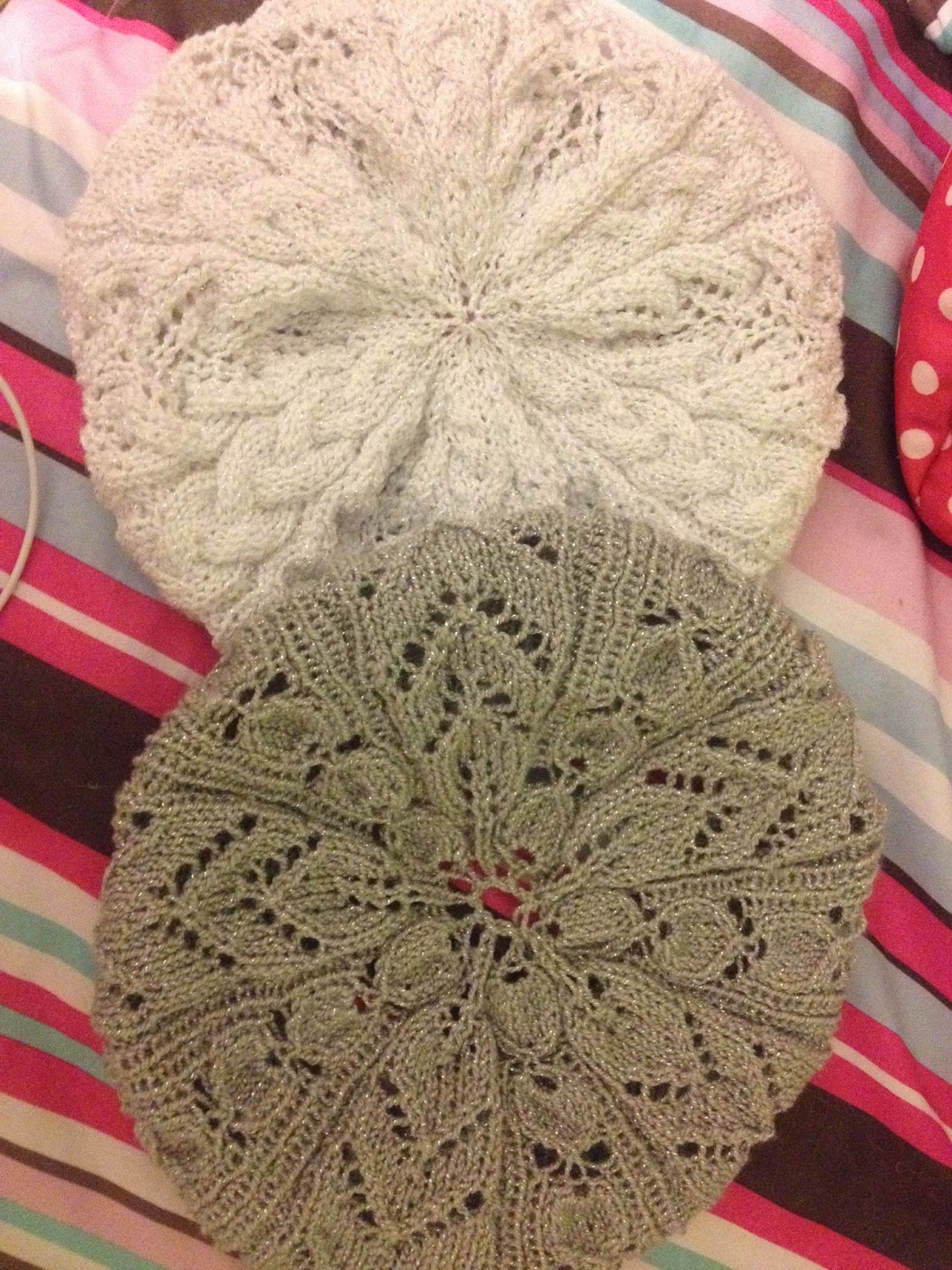 This shrug (this pattern) I finished a few weeks ago. It is a magnificently late Christmas gift; but there is worse, I have more Christmas gifts left to knit! 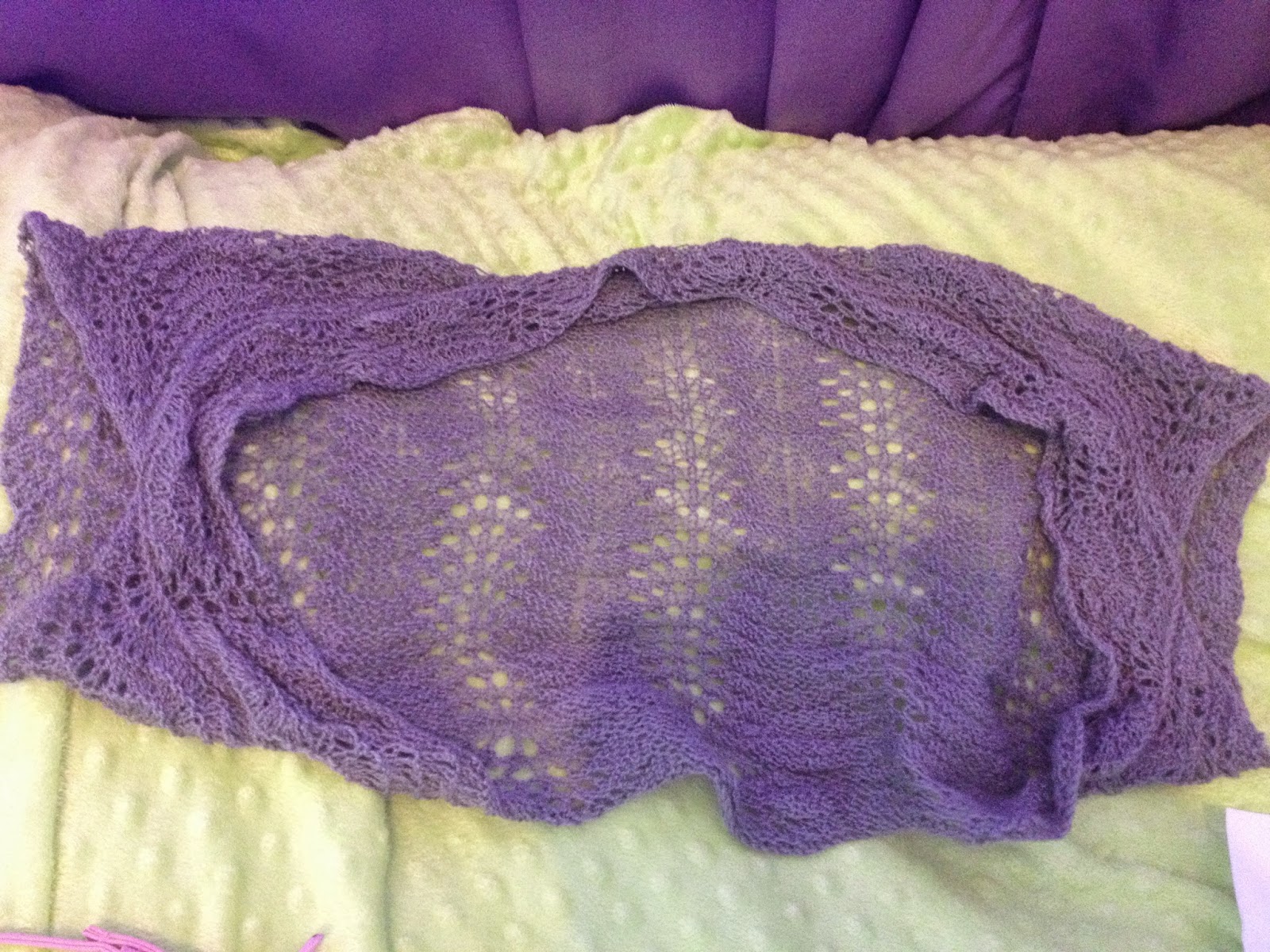 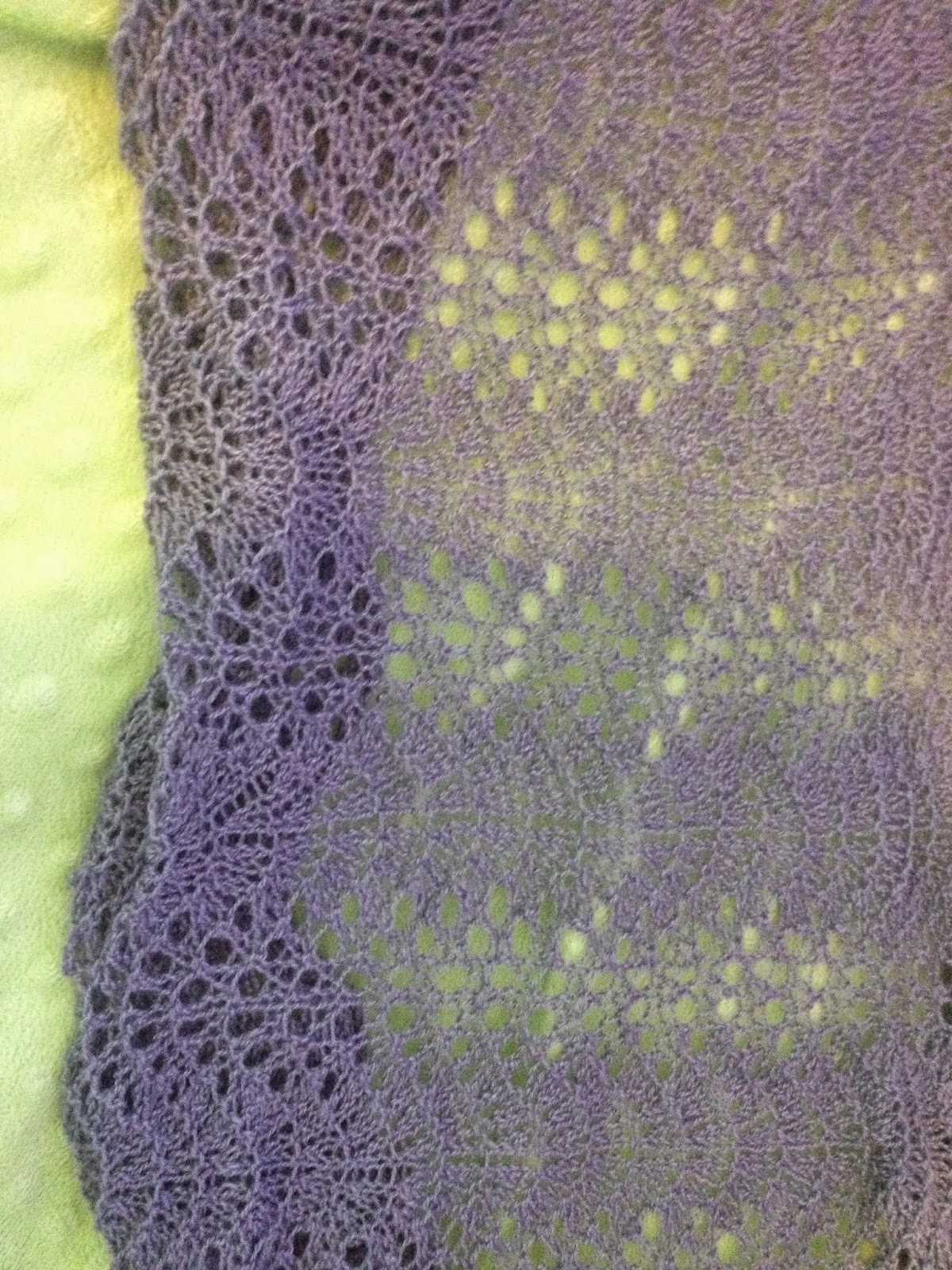 I have several projects in the works (including that eternal pink sweater) and several in contemplation. I love being able to knit, and I love scrumptious yarn.